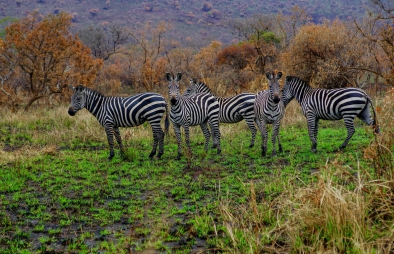 Rwanda is currently recognized as East Africa’s top safari and tour destination. The famous gentle gorilla apes in volcanoes national park, chimpanzees in Nyungwe national park, and the outstanding various wildlife in the beautiful plains of Akagera national park are equally great attractions for all wildlife, landscapes and primate lovers to encounter on their Africa safaris.

Unfortunately, due to the Rwanda civil war, the wildlife population in Akagera national park was eroded for human settlement. The glory of the park was restored when wildlife conservation bodies such as the Rwanda development board, Akagera Management Company, Howard Buffet Foundation, and others.  The bodies Joined efforts in restoring the former glory of the park.

In the later year of 2015, wildlife such as lions, Black rhino, African elephants to mention but a few were seen re-introduced to Akagera national park. To boost the wildlife population in this protected area.

Akagera national park is located in Rwanda, one of Africa’s smallest countries in the central Africa region. The park is found along the western border side of Tanzania and on the eastern side of Rwanda. The park derived its name from the river Kagera, a major water stream in the park. This river imputes its water into Lake Ihema, which is found in Akagera Park as well.

The Park is home to over 8000 wildlife species distributed in the savannah plains of the national park.  The game drive experience in Akagera national park offers a great chance to sight the various wildlife species in the park that include: lions, African buffalos, leopards, African savannah elephants, black rhinos, hyenas, zebras, impalas, duiker waterbucks, klipspringer, cape eland giraffes and many more.  The wildlife of Akagera national park can as well be sighted while on kale Ihema.

Lake Ihema is the only large water body located in Akagera national park. A boat cruise on this lake is another great opportunity for wildlife viewing while on a Rwanda wildlife safari.

With a bird population of over 500 different bird species, Akagera national park is Africa’s bird haven worth encountering for all bird lovers, on an African birding expedition. The park is a resident of a number of Palearctic migrant birds, Zambezian biome bird species, water birds, papyrus endemics, over 40 raptor species, and more.  The morning and evening hours during the drive along the park’s savannah tracks are a great chance to view the cocktail of birds in Akagera national park.

For fish lovers, sport fishing is one activity not to miss on a Rwanda safari. The park is mainly served by water bodies that include rivers, papyrus water streams, and Lake Shakani. These are breeding grounds for a number of fish species. Fish lovers can hook up the various fish species found in the recreation centers. Common fish species caught in Lake Shakani include catfish, tilapia, and more.

Immerse in the cultural traditions of the surrounding communities around the national park. The surrounding communities are mainly dominated by cattle keepers.  Activities and processes regarding cattle grazing, milking and milk processing, and more. All are enjoyed by tourists that go beyond the physical attractions and wildlife of Akagera national park.

An air transfer is another option for tourists that prefer faster means to reach the national park.

A variety of accommodation facilities are available for the ranging tourists, from the Budget, midrange to luxury.  Some of these include; Akagera rhino lodge, Ruzizi tented lodge, Akagera Transit lodge, Akagera game lodge and Karenga Bush camp.

Dolphin Tours and Travel is a seasoned Uganda-based Tour Company, providing some of the most life-changing safari memories to visitors in East Africa (especially Uganda, Rwanda, Kenya and Tanzania).